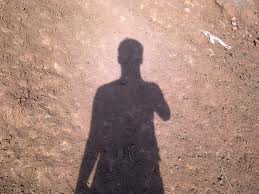 The first two posts responding to Denis Lamoureux’s contribution to Four Views on the Historical Adam can be found here and here. Taking up where I left off, Dr Lamoureux cites a Barna Group study “Six Reasons Young Christians Leave Church” in which it is stated, “One of the reasons young adults feel disconnected from church or from faith is the tension they feel between Christianity and science…” I believe that such research has value, and not having read the study I’m not in a position to respond to it. However, considering the way Dr. Lamoureux is using it to defend his thesis, if young adults are leaving the church because of this tension it’s because of something inherent in Christianity—it’s supernatural revelation. Isn’t there “tension” between creation ex nihilo and “science”, or between the Resurrection and “science”? Of course there is, and there always will be in this life. Supernatural events are square pegs that don’t fit neatly into naturalism’s round holes. The existence of a real Adam in time and space, created directly by God’s hand, is one of those square pegs.

Beginning on page 39 of the book, Lamoureux shares some of his personal testimony, how he came to know the Lord and some of the struggles he had as he pursued advanced degrees in theology and biology. He advises the reader that he was a thoroughly committed Young Earth Creationist and left medical school to become a Creation Scientist with the intention of disproving evolution. However, over the course of his studies he came to view the evidence for evolution to be overwhelming. In a short treatise like this, I don’t expect a detailed defense of this overwhelming evidence, but he could have at least addressed a few of the most common (and powerful) criticisms of evolution. Be that as it may, space constraints or a word limit may have prevented this.

Lamoureux concludes this section by asserting that he embraces the time-honored complementary relationship between Scripture and science, what he refers to as “God’s two divine books”–the book of God’s Word and the book of His Works. This, I suggest, is the point at which the author has veered off the tracks. God only has one book of special revelation in which He explains His works, such as creation, redemption, resurrection, etc. Whenever we place a second source on par with the Scriptures it is that second source which will take the place of preeminence—every time. It becomes the conduit through which we interpret Scripture, when in fact we should be understanding science in light of Scripture. God doesn’t give us scientific explanations, therefore the Bible isn’t a science textbook. However we do not interpret the sacred text via the modern spectacles of scientific consensus. Doing so narrows revelation to a handful of “theological points”.

For Lamoureux, Adam did not exist because according to our current understanding of “science” he could not exist. What are we to do with him then? Alter our approach to divine revelation? Assert that Jesus and Paul were wrong about him? Downplay or disregard his theological significance in the history of redemption? Make him nothing more than a shadow on the ancient pages of a divine story told long ago? A historical Adam isn’t a burden Christians are obliged to take care of, but an integral part of God’s plan and purpose.

We’ll examine this further in the days ahead. 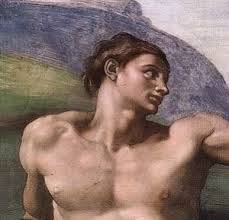 Continuing to interact with Denis Lamoureux’s contribution to Zondervan’s Four Views on the Historical Adam, Professor Lamoureux informs us that his pastoral concern is that young men and women know there is a Christian view of origins that accepts evolution and recognizes that our faith does not rest on the existence of Adam (pg. 38). He asserts that our faith is based only on Jesus Christ, His sacrifice on the Cross, and His bodily resurrection from the dead.

Firstly, the biblical narrative is organically woven together. You can’t uproot one doctrine and expect that it won’t affect another. This kind of compartmentalization of Scripture separates what God has joined together. It disassembles the connections.

It’s analogous to a novel in which character development, theme, and plot are said to be of little importance. It’s only the climax that really matters. However, it’s the back story that sets up the climax. They’re tied together. Adam is the fountainhead of the human race and his fall into sin necessitates the incarnation, the crucifixion, the atonement, and the resurrection if salvation is to come to a broken world.

Secondly, if Jesus Himself was wrong about there being a historical Adam how do we know He wasn’t wrong about other matters, like His own person, work, and mission? How do we discern when Jesus is fallible and when He’s infallible? What’s the criteria? When modern scientific consensus disagrees with Him? Modern scientific consensus doesn’t take into account the supernatural, nor should it. The creation of man transcends naturalism.

Thirdly, why does Dr. Lamoureux insist upon the historical necessity of Jesus’ death and resurrection, but deny the existence of Adam and original sin? What makes one more of a historical necessity than the other? Of course, as Professor Lamoureux states, “our faith is based only on Jesus”, but Jesus Himself asserts the historicity of Adam. If the author is to be consistent, he should hold the position that Jesus didn’t really exist either. His life, like the account of Adam, was a little story God told ancient man to communicate spiritual truths. Yet, our author insists, Jesus did and said what is recorded in the Gospels. He will have to explain how doing so is not arbitrary.

We’ll look at his work further in our next post. 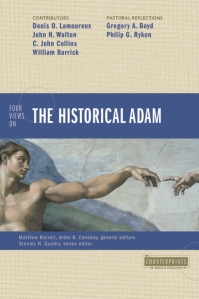 You may be familiar with the Counterpoints series published by Zondervan. Some editions are more useful than others, but they’re worth having if just to get a better understanding of various and opposing viewpoints on an array of theological topics.

I wish to interact with Denis Lamoureux’s contribution in “Four Views on the Historical Adam”. He holds to an evolutionary creation view, which is the belief that “the Father, Son, and Holy Spirit created the universe and life, including humans, through an ordained, sustained, and intelligent design-reflecting natural process.” This view also denies the existence of a historical Adam. I’m not going to deal with his contribution to the book in its entirety in this post, but hope to in the days (well, in my case, probably weeks) ahead.

One must begin by asking why Dr. Lamoureux, with a Christian worldview, presupposes naturalism when it comes to human origins? Creation itself is not natural, it’s supernatural by definition. Yet the author asserts that, “similar to the way that the Lord used embryological mechanics to create each of us in our mother’s womb, He also employed evolutionary processes to create humanity.” (pg. 37) I would like to ask Dr. Lamoureux why the God who created the heavens and the earth is constrained to create mankind through an evolutionary process? Whatever one thinks about whether God revealed scientific facts in the Bible thousands of years before their discovery by modern science, He did reveal in the text of Scripture that He created man directly, personally, and supernaturally.

So how does Dr. Lamoureux deal with this thorny problem? By concluding that modern science reveals the Old Testament to be a divine accommodation to an ancient and ignorant people. God didn’t really create man directly, personally, or supernaturally. No, since ancient man could not understand modern science, God (as it were) told him a little story he could grasp. Now, I absolutely believe that God accommodates His revelation in such a way as to condescend to our understanding. However, this is not the kind of divine accommodation Lamoureux is talking about. This is, in my view, a wholesale undermining of the text. Was God only communicating with an ancient people when the opening chapters of Genesis were written down? Is it not divine revelation to a modern people as well? We’re just scientifically sophisticated enough to know that God really meant the opposite of what He said? Perhaps, in a later age, we will discover that God really meant what He said in the first place.

In the introduction, Professor Lamoureux asserts that the central conclusion of a previous book he penned on this subject is that Adam never existed, and this fact has no impact whatsoever on the foundational beliefs of Christianity.” (pg. 38) I find this a curious statement in light of the historical nature of the Christian faith. Why is it necessary for the life, crucifixion, and resurrection of Christ to be historical, but not the life and death of Adam to be so? If God has revealed an intimate historical and theological (not to mention organic) connection between the first man and the Son of Man in Scripture, why is it that Dr. Lamoureux dismisses it so easily?

The foundational belief he has in view is the fallen nature of mankind. He posits that this spiritual truth can be separated from any historical context. All we need to know, in the end, is that we are fallen, sinful human beings in need of redemption. There is no “original sin”, accept perhaps incidentally. This, in fact, illustrates something Lamoureux likes to assert frequently—that the Bible is a book which communicates spiritual truths divorced from historical or scientific truths. How does he know this? The spiritual truth squares nicely with his Christian worldview, the rest doesn’t square with his naturalism.

We’ll explore this further in our next installment.

BONUS: Happened to come across this review of Professor Lamoureux’s full length book I Love Jesus and I Accept Evolution by Dr. James Anderson. Enjoy!

Since evolution is a fact, I thought you might enjoy some insight from the scientific community. They seem to have a bead on what evolution is going to do to the human face over the next 100,000 years or so.

Take a look. Make sure you view picture 4 of 5. I knew there was some strange affinity between the human race and puppies.

Kinda weird. But hey, this is science.